Muktinath Temple Nepal is paderived from the “Mukti” which means Salvation or Niravana and “Nath “means “God or Master “Muktinath Nepal is a Sanskrit name which itself holds sorts of emotions for the Hindu Devotee. Muktinath Temple (Chuming Gyastsa) is a symbol of religious symbols between both hindu and Buddhists .Hindu believes that Lord Vishnu got salvation from the curse of Brinda (wife of Jalandhar). Therefore ,he is worshipped as Muktinath Temple (lord of Salavation).The holy shrine ,which is said as Its is arisen on its own ,is one of the eight such shrines and other shrines include Srirangam ,Sri Mushnam Tirupati ,Naimisaranyam ,Thottadri ,Pushkaram ,and Badrinath ).   This Pagoda   style Muktinath Temple is also one of the 108 Vaishanava Shrines . Muktinath is located at altutide of 3710 m and 48 km feom Jomsom . You will see 108 water spouts behind this beautiful temple ,which will give you ` feelings that you have self –imposed in a Mythological place . Visitors can get magnificent view of Himalayas and the amazing valley of Kaligandaki and the cultural diversity over there .

This is a monastery of Tibetan origin. Legend has it that the Syandol Lama, a monk from Tibet founded this monastery. This was actually used as a hostel for monks before collapsed and people of Khinga and Jharkot later restored it. The main deity’s Monastries are Sakyamuni, Chingresig and Guru Rimpoche. The monastery is situated at left from entrance gate of Muktinath temple complex, would be worth it.

A Hindu Guru by the name of Lord Shri Swaminarayan is generally associated with the Temple of Muktinath. Also known as a Satguru of Sabij Yoga, towards the end of the 18th century he practiced severe penance in Muktinath for two and a half months and attained the highest degree of proficiency in Nishkamvrat. In 2003 his followers funded the new wall around Muktinath and raised a small monument for him at Muktinath.

Another attraction for the pilgrimage is the River kali Gandaki from where one can collect fossils of the Jurassic age. You can also buy these fossils from the locals. Shaligram, a black stone fossil if found, is considered sacred and is kept in Pooja (prayer) room in the house. It is supposed to be symbol of Lord Vishnu. Gloriously described in Puranas as Krishnagandaki (Black Gandaki) as well as Chakranadi, and worshipped as one of the holiest rivers, Krishnagandaki consists of seven Gandaki rivers supposed to have sprung from cheek (Gandasthal) of Lord Vishnu.

The prakaram(outer courtyard) has 108 bull faces through which water is poured. It is of freezing temperature. The sacred water that flows in 108 pipes around the temple complex denote all sacred Pushkarini waters (Temple Tanks) from all 108 Sri Vaishnava Divya Desams including Srirangam, Tirumala, Vaikunta, where the devotees take their sacred bath even in the freezing temperatures. There is an old Buddhist monk present in the temple. The worship is conducted by Buddhists.

In front of Muktinath Temple there are 2 Kunda (Water ponds). This is generally used for holy dipping and is believed to hold the power to wash away negative karma and the results of one’s past negative actions.

A little below the Muktinath Temple you can see the Tibetan style Jwala Mai Temple. This Temple is famous for the water that it issues from a rock inside it. Inside this Temple behind a tattered curtain, are small natural gas jest that produce Continuously burning flame, the Jwala Mai temple has a spring and there are three eternal flames “Holy flame from soil”, “Holy flame from rock” and “Holy flame from water” fed by natural gas. Apparently two flames are continuously burning. The Hindus believe that this fire was lit as an offering made by Brahma himself, (the creator) as he set water on fire.

According to Hindu myth ,it is belief that the word “MAYA “(an illusion of life cycle of birth and rebirth ).Everybody seeks to get rid of this cycle and get nirvana. 108 waterspouts in the backyard of temple which is called as Muktidhara where frozen water flows continuously from the bullhead and in the two ponds as well .It is believed that taking bath in 108waterspouts and two kundas brings salivation .

Which are the best Months to Visit Muktinath Temple?

March ,April ,may ,June ,July ,September ,October and November are the best time to visit Muktinath Temple. Weather will be clear as well as the mountain ranges can be seen clearly.

Which Permit is Required to visit Muktinath Temple ?

Travel Documents requirement for Muktinath yatra
Passports
People from all countries except India require a valid passport to enter Nepal. An Indian national must have any of their documents like Valid Passport, Election Commission Card (Voter Id) with Photo or Identity Card issued by Embassy of India in Kathmandu if they are coming by Flight in Kathmandu but if they are coming by road/train they can come with an ID card which issue by the Indian Government.
For Indian children below the age of 18 years the school, birth certificate or college ID is sufficient. The ID should clearly reflect the traveler’s picture, school or college name, date of birth as well as the class in which the student is studying.

Visas
An Indian national do not need a visa to enter into Nepal. Most nationalities can issue a visa on arrival to Nepal but travelers from other countries like Nigeria, Ghana, Zimbabwe, Swaziland, Cameroon, Somalia, Liberia, Ethiopia, Iraq, Palestine, and Afghanistan need the visa to be obtained before travel.

Validity
Various lengths of stay tourist visas can be purchased. If you want to obtain a visa on arrival, you will need to fill in a landing card, (most airlines provide these before landing in Kathmandu, if not, they will be available in the airport) pay a fee (cost differs depending on your length of stay) and provide a passport photo so don’t forget to bring one in your hand luggage to present to the immigration officers.

There are many ways to reach Muktinath : 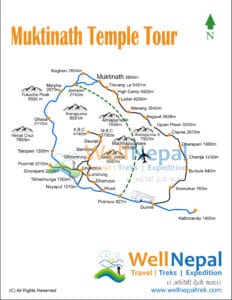