Upper Mustang is an upper part of the Mustang comprising the northern two-thirds of the Mustang District of Gandaki Province, Nepal. Upper Mustang `Lo` is the formerly Buddhist Kingdom of Himalaya which is one of the most beautiful Himalayan deserts on Earth. It is located beyond the Annapurna Mountain to the North of the Mustang district and bordering Tibet and is home to century-old sky caves and monasteries. Upper Mustang is the best place to explore the hidden world of the ancient Buddhist kingdom of Mustang. One of the most fascinating things to do is trekking the upper Mustang. Upper Mustang consists of three rural municipalities namely Lo Manthang, Salome, and Barangung Muktichhetra. Mustang is the restricted northern part of Nepal which consists of seven village development committees smallest democratic with 31 settlements. The people in Upper Mustang follow Tibetan Buddhist culture and speak traditional Tibetan languages. So as to protect the organic culture and tradition including the lifestyle of Upper Mustang, the Government of Nepal has declared it a restricted zone. The restricted area includes the historic Kingdom of Lo-Tsho-Dyun which translates as seven districts of Lo in the local Tibetan dialect. Tibetan dialect prevails here too.

The history of the Upper Mustang is linked with the religion, culture, and olden times of Tiber. Recently Lo Manthang Nepal is the only place in the world where real Tibetan culture is still preserved well. Lo Manthang is the capital of Mustang, situated in the north of Nepal, which is located on an isolated rugged plateau and hidden behind snow-covered Himalayan Mountains.

Mustang before was a very independent kingdom though closely tied by language and culture to Tibet. From the 15th to 17th century, due to its strategic location, Mustang gained the power to manage trade between India and the Himalayan region. Its history dated back to the 15th century when it is considered to be a strategic location of Mustang control over the trade between the Himalayas and India. Definitely, it confines some natural beauty, along with a typical Nepalese remote lifestyle. At the end of the 18th century, the kingdom was annexed to Nepal. Though still recognized by many Mustang residents, the monarchy officially ceased to exist in 2008 with the order of the Government of Nepal.

Why is Upper Mustang Restricted Area?

Mustang is the restricted northern part of Nepal which consists of seven village development committees smallest democratic with 31 settlements. The people in Upper Mustang follow Tibetan Buddhist culture and speak traditional Tibetan languages. So as to protect the organic culture and tradition including the lifestyle of the Upper Mustang, the Government of Nepal has declared it a restricted zone. The restricted area includes the historic Kingdom of Lo-Tsho-Dyun which translates as seven districts of

Lo in the local Tibetan dialect. Tibetan dialect prevails here too. The Buddhist society of Upper Mustang is divided into groups comparable to the castes of Hindu culture. It is not only the Upper Mustang but the trekking area is open or has a border or has a connection with another country, the government policies in Nepal require to have a special permit also called a restricted area. It is all due to border security and to reduce the illegal activities on the border between two countries.

Upper Mustang is a continuation of Lower Mustang on the Annapurna Circuit yet its people and landscape are much different. Formally, and still locally, known as the kingdom of Lo, Upper Mustang was a restricted demilitarized area until 1992. So people from other countries need permits to visit the Upper mustang. There is no restriction on the length of time a person can stay in the ACAP area. Also, if someone is going to Upper Mustang (from Kagbeni Onward) they require a RAP (Restricted Area permit).

Culture and Tradition of Upper Mustang

The people of Upper Mustang follow the Buddhist religion and are deep-rooted in the religious sentiments of its people. The township abounds with many Chhortens, Mani-walls, and Monasteries. You can see the Player’s flag above all the houses- conveying mantras to all corners of the world. Upper Mustang is an alternative way to experience the Tibetan culture and landscape to the tours provided by the Chinese government. Gurung and Thakali are meant to be the dominant ethnic groups in the Mustang Districts population. Mustang is a field with purely natural and cultural diversity. 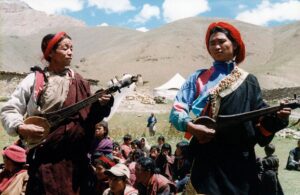 Though Upper Mustang followed different courses in history, they still share a lot in terms of social systems, landscape, and beliefs. The houses and inns themselves are made in traditional flat mud roof style with wood for cooking and worshipping and the top floor is for sleeping. People in Mustang still live together as a joint family. Still in Mustang still there is a culture of women marrying one or more husbands which are known ad Polyandry. Tiji, Lhosar, Saka, Luka, and Duk Chu are the main festivals in Mustang.

Festivals and Monasteries in Upper Mustang

Festivals like Lhosar, Saka Lugka, and Or Duk Chu structure the passing seasons. On various occasions, lamas are called to perform rites in individual houses. Tiji festival is one of the great festivals among the Mustang people.  Tiji festival is celebrated every year in the month of April or May which is influenced by Tibetan Buddhism and has an important role in the Culture of Mustang. 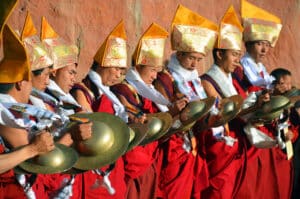 Another famous festival is Yarlung which is celebrated in Mustang for three days in the month of August each year. The first day is for King`s activities, the second day is for monks and the third day is for local people to get involved in celebration activities. Horse racing is the main attraction of this festival but local people enjoy singing dancing and drinking.

Next, Lhosar is also a festival celebrated in Mustang follows the Buddhist culture. There are two types of Lhosar one is Chhegu ema and the other one is Chhegusemma. This Lhosar festival is celebrated for three days and during these three days, people visit their relatives, organize a party, and dance and drink. Getting together is the main attraction of this festival.