Bhutan is the Himalayan Kingdom loaded with superstition and mythology, where the finest historic culture blossom and the most recent universal enhancement are vigorously grasped. Bhutan is rich in Culture and welcoming folks. Bhutan is known for its natural beauty, rich culture and heritage and gross national happiness as well is the only carbon-negative country in the world filled with magic where people are happy and simple. The trip to Bhutan from Nepal will be totally different from Trekking in Nepal`s Himalayas where engaging with culture and places will be focused rather than hiking or trekking. The Tour to Bhutan offers a chance to visit the two Himalayan Kingdom-Nepal and Bhutan known for their stunning mountains, diverse landscape, warm hospitality, and unique culture and tradition. 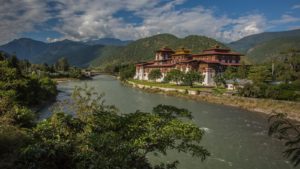 The journey leads you to the beautiful country of Bhutan. As you go from one place to another. You can find numerous religious sites in most parts of the villages in Bhutan. Thus, you can have a good chance to observe the rituals, culture, and practices. You can hike to Tigers Nest Monastery which is a famous spot in Bhutan and observe Paro Dzong, a 15th-century fort that holds 14 shrines and chapels. During the Bhutan tour from Nepal, you will reveal ancient monasteries, unique construction, imposing high hill valleys, and Himalaya Landscapes, where snow-capped mountains stand neighboring the shady ravine curl up in an opaque forest.

March to May is considered the spring season which is the first season of the year when tourism is at its peak, and the weather is at its best for the treks and tours in the Bhutan Kingdom. Bhutan is unexpectationally beautiful in the spring season and is the best time to visit Thimphu, Paro, Bumthang Vale, Punakha, and Wang due to Phodrang. Spring is the driest season in Bhutan. The southern region experiences a subtropical climate, with hot days and pleasant, cool nights, especially in places like Thimphu, Bumthang, and the Paro Valley. The skies are clear and the sun is bright, with little chance of rain until the monsoon hit around June or July.

Spring is also the best season for high-altitude hiking enthusiasts to visit. You can plan a trek in Jholmolhari or Druk Path. You can also get to experience one of the oldest festivals in Bhutan which is usually held at the beginning of March. This festival is known as Punakha Drubchen (Punakha Dzong). This is one of the glorious celebrations of the country`s victory over the invading Tibetan army.

June July August is meant to be the Summer Season where you can experience an increase in the rain, in both frequency and volume. The constant rain can cause a lot of cloud cover, and if you are there for trekking or viewing mountains, then summer will leave you disappointed. On the other hand, for those who want to avoid the crowd of tourists, the summer season is meant to be an excellent season. Summer is the off-peak season in Bhutan due to the hot and rainy weather. However, temperatures in the summer are the hottest in the year, with even the mountain regions feeling warm, though wet and humid. You can get to explore the culture of the kingdom, and tour the ancient historical sites that are found all over Bhutan.

You can get to experience the festival which takes place in mid-July, which is known as Haa Summer Festival. It is a celebration of the nomadic and traditional lifestyle of the Bhutanese people.

September till November is meant to be an autumn season in Bhutan which is the most excellent season to visit, trek, and travel. This is the peak season for Bhutanese tourism and a great time to travel. It is the best time of the year for trekkers, avid travelers, and photographers to visit. The skies are clear and blue and perfect. Fall is the peak season for tourism in Bhutan, a large number of travelers flock to the country to enjoy the cool and mild climate. Though it is the most peak season you do not need to worry about the crowd of tourism.

With clear skies and lower temperatures, there is better visibility. Planning a trek to Jholmolhari, Dagala, Druk Path, and more places is an excellent plan. You can also visit Phobjikha Valley, which is regarded as the happiest place in Bhutan and also a must-visit tourist destination. This valley has gained an unparalleled reputation for a variety of reasons.

You can also get to take part in a famous festival of Bhutan which is known as the Black Neck Festival held in the month of mid-November.

December to February is meant to be the winter season in Bhutan, which is a challenging season due to snowfall but is also regarded as the best season to visit the western region. It is a time when a blanket of snow covers the ground. The roads are frequent due to heavy snowfall, and getting up to the mountains is almost impossible. As it is the off-peak season in West Bhutan, the hotel prices are low and there are fewer crowds. It is the best time to tour the western Dzongkhags of the kingdom, around Paro, Thimphu, and Wang due to Phodrang and Punakha where it is cool and milder, yet bright and sunny.

Expect snow and frost, especially in January and December. The temperature drops below the freezing point and also there are strong winds and there is very strong winds and little rainfall during winter. The best place to visit during winter is Royal Manas National Park. It is home to some rare and endangered wild animals and other exotic species that are unique in Bhutan.

Highlights of the Bhutan Tour