Mustang has become one of the dream destinations for many people. The upper mustang area opened for treks and tours in the year 1992. In fact, Mustang was the last forbidden kingdom within Nepal, and it was isolated for hundreds of years, thereby developing its own district culture and tradition.

Upper Mustang consists of deserts, medieval rock caves, arid land, cliffs, and interesting Buddhist culture. You will get a chance to explore the most famous places of Mustang such as the hidden kingdom of Lo Manthang, Jomsom, Muktinath Temple, and many more villages. Lo Manthang the ancient capital of Upper Mustang, is a small town with around 150 houses, a palace, and a monastery called Lhakhang is around 200 years old.

Upper Mustang is an arid river valley lying near the Annapurna Circuit in the rain shadow region of the Himalayas. This area is full of historical and religious monuments, and its distinct geography differs from other parts of Nepal as it lies in the rain shadow of the Himalayas. Geographically, it is a part of the Tibetan Plateau, and because of it, its culture resembles that of Tibetan rather than Nepali.

Many people may not prefer visiting Mustang during winter. The winter season is the coldest season in Nepal that extends from December to February (December, January, and February) because the area faces harsh weather conditions during this time. During winter, Upper Mustang becomes really cold. You can see almost every place covered with snow. You may have difficulty finding teahouses and restaurants at this time. Although the weather and temperature of Mustang are high during winter, the scenic beauty of the place doesn’t fade. You can enjoy most of the aspects of Mustang during the winter season too. Join High Camp Adventure for an exhilarating trip to Mustang during winter.

The weather and temperature of Upper Mustang in December range from 9 to 12- degree Celsius during the daytime and at night it may range from 0-5 degrees. December is not the coldest in Upper Mustang.

The Temperature of Upper Mustang in January

The Temperature of Upper Mustang in February

February is the Upper Mustang and may not be chilly as January. The average temperature of the region ranges from 9- 14 degree Celsius whereas, at the night, the temperature reaches 4-5 degrees. 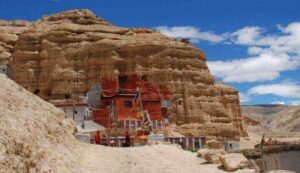 December, January, and February are winter here in Nepal and Upper Mustang during this time remains mostly inactive. As the weather gets biting cold, people of the Upper region also descend to the lower region where the weather is at least bearable. Hence, the cold temperature will be testing making it nearly impossible to trek in the Upper region.

Therefore, trekking in Upper Mustang during winter is not recommended. Nevertheless, if it is the only time you are available to do this trek, you may head for trekking up to the lower Mustang. The temperature ranges around 0-5 degrees during day time and drops to -25 to -20 degrees during nighttime. The temperature during the daytime is bearable however, night time very difficult to pass.

Food and Accommodation of Mustang Trek in winter

Many people in the Upper Mustang are engaged in providing teahouses and accommodation facilities for different trekkers trekking to the Upper Mustang. Because of the harsh cold of the winter season and less number of trekkers during winter, the people of the region usually migrate to the cities such as Kathmandu and Pokhara. Hence, most of the teahouses will be closed. A very few of them might remain open with the least of facilities and food supplements. If you are someone who has a high demand for food, winter might not be a perfect time to go to the Upper Mustang.

Some Tips for Upper Mustang trek in Winter

Upper Mustang trek can be enjoyed in almost all seasons with all season having their own different perks.

Spring Season and Autumn Season is the most popular season for Upper Mustang Treks, very least chance to rain and cold temperatures will be ascending into the Himalayas, in spring and autumn seasons the temperature will be warm, and good atmosphere in the mountains, and you will see clear Mountain View, not snowing, not mush cloudy and fuggy compare to the winter season in Nepal. So we would highly recommend going to Upper Mustang in the autumn or spring Season.

Upper Mustang is the Himalayas’ rain shadow area, making it an excellent monsoon trek and open year-round for trekking. The most crucial aspect of winter is when most people leave the capital to prevent snow. Upper Mustang is generally the best time to visit April-May-June-August, and September-October, and November is the perfect time to visit the valley of Nepal.

December, January, February, and Early March are winter in Nepal, and in Upper Mustang, it will be snowing and cold temperatures. So most of the trekkers visit this place in Spring-fall and autumn-fall.