Mustang has become one of the dream destinations for many people. The upper Mustang area opened for treks and tours in the year 1992. In fact, Mustang was the last forbidden kingdom within Nepal, and it was isolated for hundreds of years, thereby developing its own district culture and tradition.

The Upper Mustang trek is a beautiful adventure that goes up to Lo Manthang in the Himalayas. Upper Mustang consists of deserts, medieval rock caves, arid land, cliffs, and interesting Buddhist culture. You will get a chance to explore the most famous places of Mustang such as the hidden kingdom of Lo Manthang, Jomsom, Muktinath Temple, and many more villages. Lo Manthang the ancient capital of Upper Mustang, is a small town with around 150 houses, a palace, and a monastery called Lhakhang is around 200 years old.

Upper Mustang is an arid river valley lying near the Annapurna Circuit in the rain shadow region of the Himalayas. This area is full of historical and religious monuments, and its distinct geography differs from other parts of Nepal as it lies in the rain shadow of the Himalayas. Geographically, it is a part of the Tibetan Plateau, and because of it, its culture resembles that of Tibetan rather than Nepali.

The Month of Autumn Season (September, October, November, and December) is an ideal time to visit the upper mustang area. Autumn has a tendency to offer favorable temperatures, clear skies, and no rain or snowfall. From the second week of September to the second week of December, the weather condition of Mustang becomes very nice to go trekking.  If you are planning to visit Upper Mustang, then plan a trip in the autumn months.  Journey to this wonderful part of the world is an inspiration in many ways. Adventure walking through the wonderful Kali Gandaki River valley and then up towards the color-changing landscape of Upper Mustang shows us the culture practiced there. Ancient wall caves are major attractions of the region. High pass walking trail traversing up and down the hill enjoying the views of the Himalayan peaks, all of these wonders make this trip truly a lifetime experience.

The Temperature of Upper Mustang in September

The weather and temperature of Upper Mustang in September range from 20  to 33 degrees Celsius during the daytime and at night it may range from -3 to 0 degrees.

The Temperature of Upper Mustang in October and November

October and November are the very best month of the year in the Upper Mustang. The daytime temperature of Upper Mustang may range between12 to 20 degrees Celsius whereas, at Night, the temperature reaches -6 to -2 degrees.

February is the Upper Mustang and may not be chilly as January. The average temperature of the region ranges from 9- 14 degree Celsius whereas, at night, the temperature reaches 4-5 degrees.

The weather and temperature of Upper Mustang in December range from 9 to 12 degrees Celsius during the day time and at night it may range from 0-5 degrees. December is not the coldest in Upper Mustang.

The Upper Mustang trek is an easy/Medium trekking route in Nepal. You will start your trek from altitude 740m at Pokhara and at last high altitude is 3800 to 3900 m in L0-Manthang which is the end destination of the Upper Mustang trek. You won’t feel the directly higher altitude in this trek, the altitude rising up gradually day by day.

Most of the walking path is go smoothly easy gradually, along the trail you will cross several below 4000m passes before you reach in Lo-Manthang, every day you will walk for 5 to 6 hours, start your day after breakfast at the tea house, and after 3 to 4 hours walk take a break for Lunch and few more hours walk to the last destination of the day. Per day you will ascend250 to 350m high.

There is a low amount of oxygen and low air pressure in the atmosphere. In this way, most travelers become tired after completing the trek. Gorgeous landscapes, Tibetan art, culture, and lifestyle of mountain people of the Himalayas make it easy to forget tiredness and stress. Trek Difficulty | 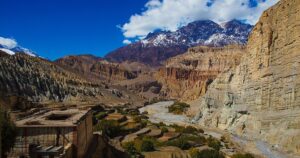 Some Tips for Upper Mustang Trek

Upper Mustang trek can be enjoyed in almost all seasons with all season having their own different perks.

Spring Season and Autumn Season is the most popular season for Upper Mustang Treks, very least chance to rain and cold temperatures will be ascending into the Himalayas, in spring and autumn seasons the temperature will be warm, and good atmosphere in the mountains, you will see clear Mountain View, not snowing, not mush cloudy and fuggy compare to the winter season in Nepal. So we would highly recommend going to Upper Mustang in the autumn or spring Season.

Upper Mustang is the Himalayas’ rain shadow area, making it an excellent monsoon trek and open year-round for trekking. The most crucial aspect of winter is when most people leave the capital to prevent snow. Upper Mustang is generally the best time to visit April-May-June-August, and September-October, and November is the perfect time to visit the valley of Nepal.

December, January, February, and Early March are winter in Nepal, and in Upper Mustang, it will be snowing and cold temperatures. So most of the trekkers visit this place in Spring-fall and autumn-fall.