Pokhara is one of the most famous places in Nepal which lies in the Kaski district and Gandaki province. Pokhara is one of the popular tourist destinations in Nepal and is also known as the capital tourism city of Nepal. Every year many tourists visit Pokhara to enhance the natural beauty. Pokhara often called a piece of heaven, is a beautiful city in Nepal blessed by nature. This 2nd largest city of Nepal sits 200km west of Kathmandu valley at an elevation of 827 m above sea level with a total area  of 55.22 sq. km

The beauty of Pokhara valley varies in the stunning snowcapped mountains, Lakes, hills, and several villages. The Fewa Lake of Pokhara has been luring both domestic and international travelers from the world around. Pokhara city is also famous for its adventurous activities and also serves as the trekking base into0 Annapurna Region. Some of the world’s highest mountains like Dhaulagiri, Annapurna, and Macchapuchhare lie just within 30 miles radius of this city.

If you are traveling to Pokhara, here are some of the famous activities done in Pokhara

Paragliding is one of the most preferred and popular activities which is done in Sarangkot Pokhara. The passion for Paragliding is increasing day by day. Pokhara is one of the top five Tandem paragliding spots in the World operated by different companies of Pokhara instructing the views of three of the World`s 8000-meter peaks with friendly conditions for paragliding holidays.

Tandem paragliding means flying with a qualified instructor Pilot where you can carefreely enjoy the surroundings and enjoy the views and take photos of your beautiful memories. Tandem paragliding is safe as well as comfortable too. Paragliding heights of 1592meters/5223 feet from above sea level. Paragliding in Pokhara is one of the best ways to experience life in the air. After reservation for Paragliding, a private vehicle takes you from Pokhara to Sarangkot. Sarangkot is the hill station where Paragliding begins. Sarangkot lies in the northwestern Pokhara valley, whose elevation is 1592 meters. The drive is around 30 minutes, and you will be given a safety brief by your experienced glider before the Paragliding takes place.

Coming to the safety of paragliding, it is operated with full safety and internationally certified pilots. Paragliding is as safe as you can make it. Safety factors in Paragliding do not depend upon the wind, air, or visibility, it depends upon the paraglider’s own attitude, belief, and preparedness. Do not get scared of the height, rather than have the experience of flying like a bird and get the awful views of the Lakes of Pokhara and The Himalayas.

You can do Paragliding in Pokhara anytime and at any month of the year as long as it is not raining and the thermals are active. It is operated throughout the year. The busy season is from September- December, and February- May. 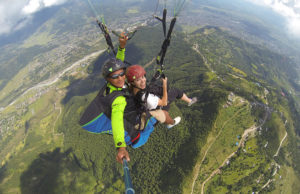 Your journey to Zipline begins from Lakeside Pokhara. Lakeside is the most tourist-attracted place in Pokhara. It takes around 30 minutes to reach the Zipline point from the lakeside by driving. The Zipline point is located at Sarangkot. Sarangkot introduces you to the mesmerizing views of the snowcapped mountains and also the Lakes surrounded by green hills and paddy fields. At the feet of 5400 meters, you will be sitting in a special harness seat and await your launch. There will be 2 participants launching at one time, the one behind you, and the race to the bottom starts. On the count of 5, you are off to the adventure. Keep your eyes open and feel nature and get into the thrill.

Talking about safety, safety is the main criterion in the development of Zipline, as the system was designed by Zip flyer LLC, USA, using advanced technology. The riders must weigh 40kg to 120kg and the age must be above 18 years old. People with injuries or pregnant ladies should not do this activity.

Also Have a Look:  6 Days Annapurna Base Camp Helicopter Trek

Among different adventurous activities that adventure seekers like, Bungee jumping is one of the most popular activities. Bungee jumping in Pokhara lies just 15 minutes away from Lakeside, Pokhara which is the one and only tower bungee jumping in Nepal. The high ground bungee station is 70 meters high and the plunge is over the artificial pond. It is a tower bungee that is set on a steel cliff extension and the base is surrounded by mountains with water right below. Experience a rush of adrenaline with a 70meters vertical drop and 3 seconds of free fall getting spectacular views of the Himalayas and the surrounding hills and rivers. Feel the ultimate thrill of jumping off a George measuring 160 meters high. On the way, near the area of the bungee jump, you will also be able to visit a beautiful Tibetan monastery as well.

Coming to the Requirements for the bungee in Pokhara, a Bungee jumper must weight 40kg above and 99kg below having the age of 18plus. Probably, if you are below 18age your parents must sign the waiver in order for you to obtain a ticket. Likewise, people with heart disease, broken legs, and pregnant ladies, are not allowed to do this stunt. After you book the ticket for bungee, refunds are not made at the last-minute cancellation. Cancellation one day before the activity will deduct a 50 percent cancellation charge, likewise, cancellation before two days or three days will deduct only a 15 percent charge.

You can fly the Ultra-light flight for fun. The time limit for this fun flying route will be of just 15 minutes and the aircraft takes you over Fewa Lake, Pokhara city, and Sarangkot Hills. Likewise, the flight duration will be of 30minutes if you want to go near Fishtail Mountain. Not very close, but the flight takes you as close as it is possible. Another one will be of One-hour flight duration. In this route, you will be able to visit the two different Mountains of Pokhara, one is Fishtail Mountain and the other is Mount Annapurna. And the last route will be of the 3different Mountains such as Fishtail, Mount Annapurna, and the view of Kapuche Lake. This flight will be of around 90minutes.

Also Have a Look:  8 Days Annapurna Base Camp Trek

Boating in Nepal is one the interesting recreational things. It has glacier-fed lakes up north to the gently moving rivers in Terai, you hire a boat for a couple of hours with a guide or without a guide, you can enjoy the moments with lots of sights near around you.

Fewa Lake is the second largest lake in Pokhara, the lake bordering the forested hill. At Fewa Lake, you can choose the type of boats you like to have to ride. The driven boats (the old-fashioned ones joined two boats with planks and pedals in the middle), rowboats, and sailboats. There is also a choice between fibred-body sailboats and wooden ones. You can do boating in Pokhara valley throughout the year except during the Monsoon. As the boat rows to the center where there is the holy Tal Barahi Temple, make a round trip to the lake or even take a boat up to the white Gumba.

The best thing about boating in Fewa Lake is witnessing Annapurna`s majestic views and the fishtail mountain, Macchapuchhare, along with the flying gliders in the sky above the Sarangkot hill. You will be stunned by the breeze that flows on the lake and by the lake`s freshness.

Also Have a Look:  7 Days Kathmandu Chitwan and Pokhara Tour