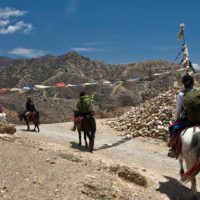 Upper Mustang is known for its caves, wide barren landscape, and the ancient monasteries. The monks are found meditating inside the cave for a year and longer. Upper Mustang is the hidden kingdom of Nepal restricted for foreign people to visit till 1992. Later in 1993, the government of Nepal gives permission to visit the destination with a special permit with them. This destination is unexplored and well-preserved region in the whole Nepal. The very limited tourist get the chance to visit the Upper Mustang.

The Upper Mustang was attacked by Ame Pal, a Tibetan warrior and Buddhist follower in the year 1380. With his sons, he builds up a walled capital called Lo Manthang. He and his 21 direct descendants rule over Upper Mustang and preserved the capital from foreign invasion. This help in preserving the culture, art, and history of this area. The one of the most famous festivals of Upper Mustang is Tiji Festival which is observed in the courtyard of the palace.