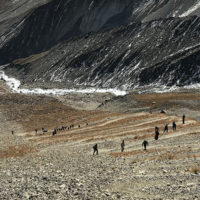 Phedi means the foot of the hill; Thorang La Phedi is a base of the Thorang La pass. This lies at an altitude of 4500m from the sea level. This is a part of Manang District and the trail gradually steepen as we trek to Thorang La.  This is the final destination to have a stopover before climbing to the top of the Thorang La; the highest trekking trail point in Annapurna Circuit Trek.