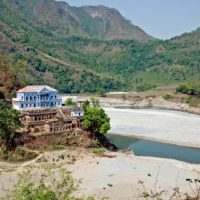 Tansen is an untouristed destination located below the Shreenagar Hills and perched above Kaligandi River. This place is located in between Pokhara and Lumbini. The name Tansen mean “northern settlement” as per the Magar language. But to contradiction, the main city of Palpa is settled by Newar people with their artistic and fine architecture. Only some of the Magars live within the main settlement. It is believed that Newar people came here for business purpose and later got a hold on to this land because of the great possibility of a business boom. Still, this place has been the center for trade and business in the mid-western region of Nepal.

Tansen Palpa is 296 km drive from Kathmandu via Butwal and 324 km drive via Pokhara. It takes about 3-4 hours’ drive from Lumbini or Pokhara. There are many places that might pick an interest of the travelers. The very well known place in Palpa is Rani Mahal which is described as the Taj Mahal of Nepal. You can stroll around Shreenagar hills and trek to a nearby destination or explore the intricate Newar settlement of Palpa. If you are thinking about spending nights there are some of the guesthouse and lodge offering the best hospitality service and the local as well as continental cuisine on request.