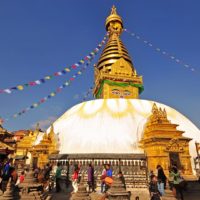 Swoyambhunath Stupa is one of the World Heritage Sites in Kathmandu valley. This stupa perched on the hill to the northwest of the valley. The stupa is also known as The Monkey Temple. There are many monkeys walking in the premise of Swoyambhunath Stupa. Some of them are sun basking while some of them are lurking around to snatch the food from the visitor. No matter what, they are believed to the guardian of this holy place.

Swoyambhunath is the center of Faith and Belief for Buddhist follower and lots of tourists visit this place to capture the beautiful architecture and its surrounding. It is considered as one of the best spots to have the panoramic view of Kathmandu valley. The base of the stupa has many prayer wheels for cirumbulation. The premises have monasteries, shrine, and temples. The very interesting thing about this area is, there are Hindu temples and people from different religious background could visit the area without any problem.