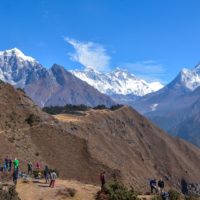 Sagarmatha National Park is a first Natural World Heritage Site of Nepal which was established in the year 1976. Later, in the year 1979, it was recognized as the Natural World Heritage Site by UNESCO. With the motifs to conserve the forest, wildlife and cultural resources this national park keep on doing its work and later they started working in conservation of natural energy and search for alternative source of energy too. Almost all the landscape is full of desolate areas, huge rocks, steep hills, and less vegetation. Most of the vegetation is fir, rhododendron, birch, juniper trees and wildlife like Himalayan Thar, musk deer, ghoral, Himalayan black bear are found within the national park.