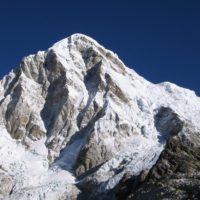 Pumori, the Nepal – Tibet bordered mountain which lies in the Malangur Himal section. It is just 8 km west of Mt Everest and is one of the prominent peaks in the Everest Region.  Pumori mean”The Mountain Daughter” in the Tibetan language where “Pumo” mean daughter and “Ri” mean mountain. The mountain was named Pumori by George Mallory as this mountain is also called the Everest daughter many climbers. George Mallory even named this peak as Clare Peak, after her daughter name.

Pumori peak is famous among the climber because of its easiest route to the summit. The Pumori peak was the first ascent in 1962 by Gerhard Lenser on a German-Swiss expedition. Many trekkers and climber climb up to the top of the Kalapatthar for the splendid close-up view of Mt Pumori.