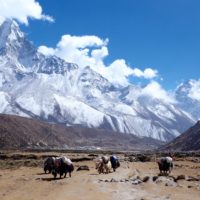 Pheriche is one of the popular tourist destinations in the Khumbu Region of Nepa. This village was primarily known for agriculture and animal husbandry. Later, with the introduction of tourism people got engaged in trekking and porter business. Fewer people grow potatoes and buckwheat and rear yaks for a living. This village is a popular stopover for acclimatization and resting ground. There are many lodges available to provide facilities for guests with modern amenities.

At Pheriche, there is a hospital established by Himalayan Rescue Association (HRA) in the year 1973. Initially, it was a small aid post established with motives to prevent the death of Nepali and foreigner trekkers from Acute Mountain Sickness (AMS). The well-trained doctors and nurse are stationed voluntarily from various country. This is opened twice a year during trekking season by volunteer doctors.