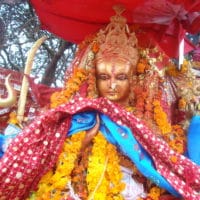 Pathivara goddess is one of the most powerful deities in Hinduism. Pathivara goddess is considered as the Sakti Peeth and reveres greatly by Hindu people. There is a popular belief that pilgrim’s desires are easily fulfilled by the goddess. This strong belief has drawn lots of pilgrims and tourist from various part of Nepal and India to pay their homage and get blessed with wealth and happiness.

The temple is situated on the top of the hill of Taplejung at an altitude of 3794m. There is sacrifice ground to sacrifice animals and the donation of silver and gold to the goddess is also done by the pilgrims. Before the invasion from Khas people to Limbuwan kingdom, this temple was the main goddess as per Mundhum (Limbu people’s history book). Later, Hindu people considered this temple as the Adi Devi, Maha Maya, Maha Rudri incarnation and worship the goddess. From the temple, the whole Kanchengjunga range can be seen. Limbu Cultural Trek is considered as the best trek in this region and lots of tourist solely for this region.