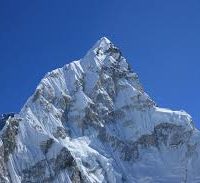 Nuptse is another Himalayan peak in the Khumbu region of Nepal. Nuptse in Tibetan is West Peak which lies SW of Mt Everest. The elevation of Nuptse is 7,861m from the sea level. This mountain can be seen from the various parts of the Khumbu region as well as solu region.

The main peak of Nuptse was climbed in the year 1961 by Dennis Davis and Sherpa Tashi from Scott route. This is the highest peak below 8000m and is considered as difficult to ascend the mountain. The topmost part of the mountain is covered with loose snow which makes the climbing more difficult as the land is sturdy enough for a good climb. However, with the time, patience and determination, the mountain can be summited.