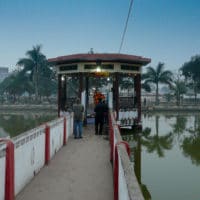 Nepalgunj is a sub-metropolitan city of Banke district, Nepal on the Terai plains near the southern border with Baharahi district, Uttar Pradesh state of India. Nepalgunj is 85 kilometers south-west of Ghorahi and 16 km south of Kohalpur and 35 kilometers east of Gulariya. It is one of the developed city in Nepal.

Nepalgunj has a diverse culture with people from different faiths living within mixed communities. Hinduism and Islam are two major religions in the city with Hindus comprising a larger percentage of the population. Other religions like Buddhism, Sikhism, and Christianity are among in the minorities. People of different ethnicity are known to have traditionally lived together, without any significant conflicts.