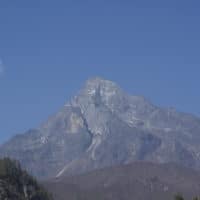 Mt Khumbila means God of Khumbu in Tibetan. This is one of the beautiful peaks in the Himalayan region of Khumbu. The local Sherpa revere this mountain as the home of God and have great religious importance. There is a belief in the Sherpa community is that Khumbila was a god and was subdued by Guru Rimpoche during the 8th century and converted to Buddhism. Still, they considered this mount to be the guardian of their realm and worship time and again.

The Khumbu region name was named after this holiest mountain Mr Khumbila. The lowland below the Lukla is called Solu and highland above is Khumbu. There is a popular belief among Sherpa; They are not allowed to climb above the tree line area if they climb they will suffer altitude sickness. The tree line above is the domain for a god while below is for the human. If they climb to the top, its like climbing above the head of god.