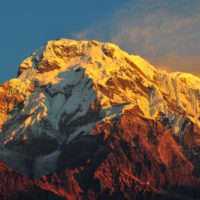 Mt Kanchenjunga is the third highest mountain in the whole world. The elevation of this mountain is 8586m from the sea level. It is situated in between border of Taplejung, Nepal and Sikkim, India. The meaning behind its naming is based on the five peaks found in the Kanchenjunga Himal. And Kanchenjunga means the five treasures of the high snow.