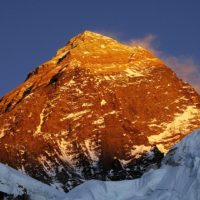 Mt Everest was first climbed by Sir Edmund Hillary and Tenzing Norgey in the year 1953 from Nepal side. There is two possible way to climb the Mt Everest; one is from southeast of Nepal which is the standard route and another is north from Tibet side.  To this great massif, Lhotse is also connected to the southeast side. Most of the mountaineers use the standard route to climb the Mt Everest. Climbing Mt Everest is not an easy task, it requires hard dedication and strong will to conquer the top of the world. The extreme pleasure being at the top of the world is hard to describe in the world. For that one have to be at the topmost part of the world.