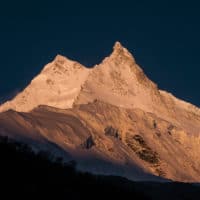 Manaslu, the 8th highest mountain of the world soaring above 8163m. Mt Manaslu is also called Kutang and lies in the Mansiri Himal which is west-central part of Nepal. Manaslu word is taken from Sanskrit word Manasa which mean “intellect or soul” and this massif was named as “mountain of the spirit”. This is the highest peak in Gorkha district and is just 64 km from Annapurna

The first climbed to this mountain was done in the year 1956 by Japanese Expedition which includes Toshio Imanishi and Gyalzen Norbu. Considering the first successful expedition done by the Japanese tea, they take Mt Manaslu as their own as the British take the Mt Everest. The Manaslu circuit trekking route was opened by the government in 1991 and the trail trek passes through the highest pass called Larkya Pass (5106m). We can observe 10 peaks over 6500m and some peaks above 7500m during this legendary trek.