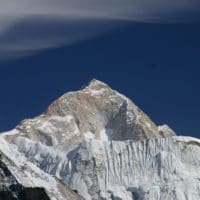 Makalu, the 5th highest mountain in the world soaring at an altitude of 8485m from the sea level. It is situated in the Mahalangur range to the southeast of Mt Everest in between the border of Nepal and Tibet (China). This eight-thousander is a pyramid-shaped mountain completely isolated from the other peaks. The peculiar character of this mountain is that there are 2 notable subsidiary peaks called Kangchungtse (Makalu II) and Chomo Lonzo. Kangchungtse lies 3km north-northwest and Chomo Longzo lies 5km north-northeast of the main summit.

The mighty Makalu was summited by the French expedition team in 1955. Among other mountains, this mountain is considered difficult to summit. This is because of the steep pitches and rocky ridges. The final ascent is full of technical ice/rock climbing. So, the successful ascent is less heard about the great massif, Makalu.