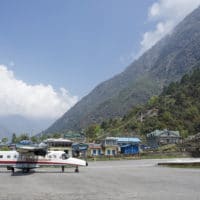 Lukla Airport also called Tenzing – Hillary Airport lies in the Khumbu region of Nepal. It soars at an altitude of 9334m from the sea level. This airport has become the gateway to Everest as most of the traveller fly to Lukla and continue their first step to Everest Region. On a daily basis, the airport conduct number of flights incoming and outgoing with multiple airlines of Nepal. But sometimes due to high winds, less visibility or cloud looming at the airport delay the flight schedule. Most of the traveller travelled here before has named this airport as one of the world most dangerous and full of thrill airport. The runway is 527m x 30m with 11.7 % gradient. And there is high terrain immediately beyond the northern end of the runway and a steeply angled drop at the southern end of the runway into the valley below.

Back to the date 1964, the initiation to establish this airport was done by Sir Edmund Hillary and under his supervision, the work was carried out too. Originally, he wanted to have plane land for easy flight but the local people didn’t give the land. So the airport was built as in the current position. But the problem still exists as the land was not a suitable proper runway. So he asks the help of local to flatten the runway by performing the local dance, foot-stomping dance. He gives the liquor to the dancer and they dance. By the year 2001, this airport goes paved and smooth flight was carried out since then.