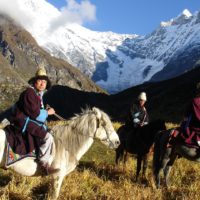 Langtang National Park was established in the year 1976. This is the first Himalayan National park of Nepal. The districts that are covered by this national park are Nuwakot, Sindhupalchok, and Rasuwa. The highest altitude lake in this park is Gosaikunda Lake (4300 m) and the highest point in the park is the summit of Langtang Lirung (7245 m). The southern border of the park is 32 km away from the Kathmandu Valley and the western border follows the rivers Bhotekoshi and Trishuli. The northern and eastern border touches the Tibetan borders.

The park was established with an objective of Conservation of forests, wildlife and cultural resources, conservation of natural resources and development of the alternative source of energy. Due to diversification in the temperature and the landscape, various kind of wildlife is found. Animals like Red panda, wild boars, ghoral, grey langur, and leopard are found.