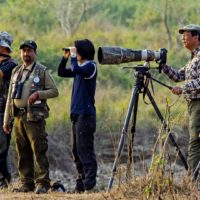 Koshi Tappu Wildlife Reserve is a protected area in the flood plain of Terai Region of Nepal covering the area of 175 sq. km. It is a first Ramsar Site of Nepal designated in the year 1987. This wildlife reserve touches Sunsari, Saptari and Udaypur districts of Nepal and includes the wetlands. It’s a paradise for the naturalist and the bird lover because more than 280 species of birds can be seen at this particular place. The migrating birds from various parts of the world come to this place to take a rest and have the breeding because of the perfect climate and the natural settings. Such kind of existence is hard to find in another part of the Earth. The species of bird found inside the reserve are watercock, Indian Nightjar, dusky eagle owl, black-headed cuckoo-shrike, white-tailed stonechat, striated grassbird, large adjutant stork, Pallas’s fish eagle, common golden-eye, gull-billed tern, Swamp Francolin, Rufous-vented grass babbler etc.

Apart from birds, Koshi Tappu Wildlife Reserve is a home for various wildings. The peculiar type of wild water buffalo (Arna) can be seen at the flood plain of Koshi River playing and grazing over the grassland. The vegetation inside the reserve is mixed deciduous riverine forest, grasslands, and marshy vegetation. The other species of mammals found inside the wildlife reserve is Asian elephant, spotted deer, wild boar, golden jackal, gaur, blue bull, Ganges river dolphin etc.