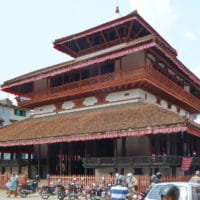 Kasthamandap temple is believed to be built in the 12th century by Laxmi Narsingha Malla with the woods of a single tree. The present building was renovated during the seventeenth century. The building has an idol of Gorakhnath at the center and four idols of Lord Ganesh on its four sides. Also, religious texts of Ramayana and Mahabharata are inscribed on the four walls. The temple is an excellent example of the art and architecture of Nepal because of the wooden carvings and the design of the temple. To this day, the temple has stood steadily without the use of any metal nails or rivets. Kasthamandap is one of the significant cultural heritage of Nepal that stands as an example of the rich Nepali art and architectural legacy of the 12th century.