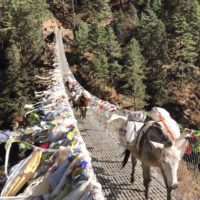 Hillary Suspension Bridge is the final suspension bridge to cross before entering Namche Bazaar. This bridge is named after Sir Edmund Hillary. It is just above the Dudh Koshi River or the white colour river always in hurry to move downward in ragging mode. This bridge is well decorated with colourful prayer flags and Khada (Buddhist shawl). Most of the traveller stop over the end of the bridge to take a good snaps and move forward swaying up and down, front and back and side to side.

While trekking from Phakding to Namche and walking along the edge of Dudh Koshi River, travellers have to move through this final suspension bridge before entering Namche Bazaar.