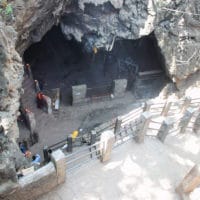 Halesi Mahadev or Matrika cave is an ancient and holiest land on earth. It is believed to be in existence for more than 6000 years ago when Lord Shiva was chased by Bhasmasur and he had to hide inside this cave. Later the demon got killed in this place. And Buddhist also revere this place as Padmasambhava spend his 3 months long meditation in this cave. This place is full of divinity and power. Carrying the religious importance as an abode of Lord Shiva and the meditation ground of Padmasambhava, this place had earned its fame throughout the world among Buddhist and Hindu follower. Thousands of follower visit this holy and pious place once in their life.

The location of this cave is mysteriously placed as this lies in between the two rivers called Dudh Koshi and Sun Koshi. And there are 3 caves which resemble the eyes of Lord Shiva. There is also Matrika Monastery near the cave. People can meditate in the area which can hold up to 1000 meditator at once. Having religious and cultural value, people visit this even though their journey is tough and bumpy.