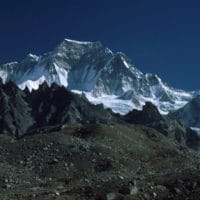 Gyachung Kang is the highest mountain in between the Mt Everest (8,848m) and Mt Cho Oyu (8,201m). It lies in Mahalangur Himal section of the Himalaya soaring at an altitude of 7,952m from the sea level. The mountain Gyachung Kang lies in the border of Nepal and China and is the 15th highest peak in the world which is less known in comparison to other lesser height eight-thousander.

On April 10, 1964, the mountain was summited by Y. Kato, K. Sakaizawa and Pasang Phutar (Japanese Expedition).