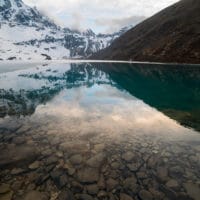 Gokyo Lakes are oligotrophic lakes situated at an altitude of 4700m – 5000m in Khumbu Region of Nepal. There are altogether six lakes in the region which is the highest fresh water located in the world. Among all the lakes, Thonak Lake is the largest lake whereas Gokyo Cho is the main river which of which, Gokyo lies to the eastern shore. The other lakes are Gyazumpa Lake, Tanjung Cho, Ngojumpa Cho. The collected water at the lakes are mainly from the seepage of glacier lakes, among them, Ngozumpa glacier is the one.

The Gokyo Lakes are considered sacred by both Hindus and Buddhists. During the festival, Janai Purnima the Hindu follower take the deep plunge at the lake and get blessed. They believe the Snake God resides at the bottom of the Lake and is sacred to all.  These lakes are linked to Vishnu and Shiva and believe that they have been preserving this place since ages.