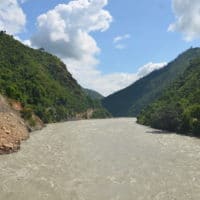 Dudh Koshi River is one of the highest elevated river in the world. This river is originated from Everest Massif, the highest peak in the world. The river is formed by the melting of glaciers and snow in the Everest Region.  It begins just east of Gokyo Lakes and flows south to Namche Bazaar. This river further flows to the west of Lukla river. Later on, this river joins to Sun Koshi and form Sapta Koshi eventually, the east side major river in Nepal.