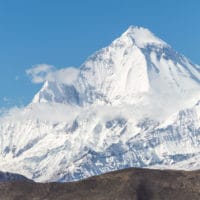 Annapurna I lies just 34 km from Dhaulagiri I and in between this, The Kaligandaki River flows in Kaligandai Gorge – the deepest gorge in the world.  The mountain was first summited by Swiss/Austrian/Nepali Expedition in the year 1960. This mountain was once believed to the highest mountain in the world and the mountain’s long ridges and valley glacier offers feasible approaches.