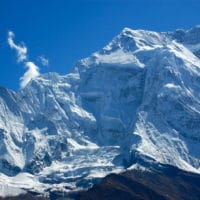 This mountain was first climbed by British/India/Nepalese Team in the year 196o via West Ridge approaching from the North.