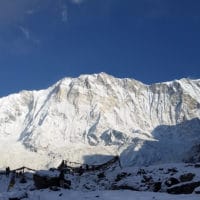 Annapurna I is the 10th highest mountain in the world. The height of this mountain is 8091m from the sea level. Annapurna I is one of the highest mountains from Annapurna Massif, which includes 1 over 8000m peak, 13 over 7000m peaks and 16 over 6000m peaks. This Annapurna Massif is bounded by Kali Gandaki Gorge in the west, Marsyandi River in the north & east and Pokhara valley in the south. The great massif is under the protection of the Annapurna Conservation Area Project (ACAP)

Annapurna I is the first eight-thousander to be summited. It was summited in the year 1950, French Expedition led by Maurice Herzog. Since then many attempts have been done and some of them led to failure. Due to the great fatality rate, while climbing, this mountain is considered as one of the most dangerous mountains among other 14 eight-thousanders.