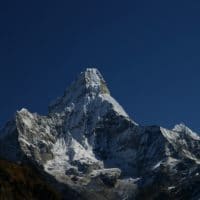 Ama Dablam is one of the most impressive mountains in the Khumbu Region of Nepal soaring at an altitude of 6,812m. Ama Dablam means “Mother Necklace” and the peak looks like a mother protect her child as the two small peaks are attached to the main mountain. It is one of the popular mountains for expedition. Generally, 3 camps are set up along the southwest ridge of Ama Dablam and it’s considered as the safest route till now. The trail to the top of the mountain in filled with ridges, towers and icy trails. The climbers need to have some skills about climbing the ridge, rocks and icy trails for a successful ascent. When you reach the top of the peak, the views open up with the panoramic scenery of Mt Everest, Mt Lhotse, Mt Makalu and other peaks. This scene is very overwhelming and fully rewarding, all the strenuous expedition will be forgotten when you are at the summit.

Ama Dablam has been the core mountain in the Khumbu region dominating the eastern sky of Nepal. Above the Tengboche, Ama Dablam stands aloft spreading its dominance. The onlookers will definitely be awed with its beauty and brilliance and be submissive to its eternal beauty. Because of its structure and ridges, it is all called the “Matterhorn of the Himalayas”